The Weird food that Aussie’s eat can be a sight to meet your eyes!  And in a land as large as Australia, you are bound to find a unique set of oddities in the culinary world.

These unique culinary surprises mean you quickly learn to go with the flow and expect the unexpected.

Encountering just a few of these delicacies, may come as something of a surprise. You may hate some of them but then again you may discover your new favourite food!

1. Lamingtons– there is even a National Lamington day!

The Lamington or ‘Lammo’ is the ultimate Aussie food! Strangely rolled into the chocolate topping are coconut bits which give it a furry appearance, beneath which is a soft sponge cake which is light and fluffy to bite into! 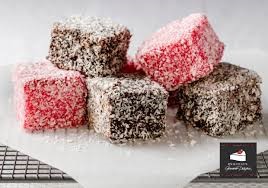 Lamintons can also be found covered in raspberry or strawberry sauce to give a pink appearance, with a thin layer of jam or cream in the middle of the two halves. Almost every bakery or supermarket sell them in Australia, and you can find them offered as an essential mid-afternoon snack with a cup of tea. Yet you still must watch out for the desiccated coconut on your lips and the chocolate or raspberry sauce sticking to your teeth!

Although there is a continuing tug of war between New Zealand and Australia as to who owns this weird looking cake, it is likely they are named after Lord and Lady Lamington in the 1900’s. Their chef Armand Galland was asked to feed some unexpected guests and sliced up some left-over sponge, dipped the squares in chocolate and covered them in bits of coconut. Galland had a French Tahitan wife, which explains the familiarity with coconut, an uncommon ingredient at the time.

Lord and Lady Lamington and their chef Armand Galland 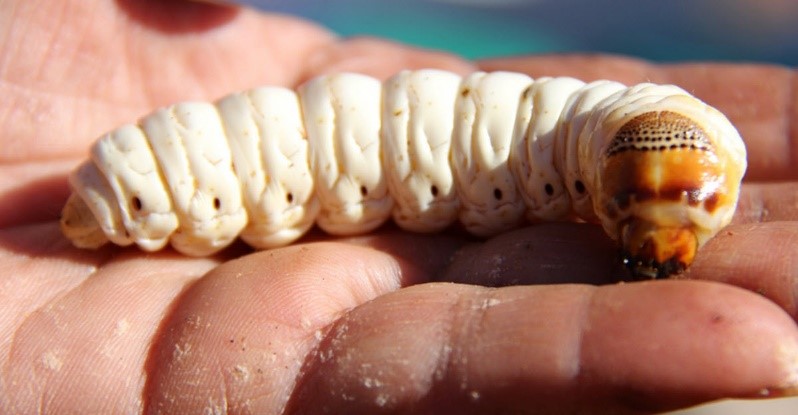 Cold and slippery when raw, with the head is bitten off, the bottom portion of the grub is simply chewed until only the skin remains, which is discarded. Eaten raw it tastes like almonds but when lightly cooked the skin goes crispy like roast chicken.  Strangely the insides taste and look like scrambled egg.  You never know, if you do pluck up courage to try one, you may get a taste for it, and even have a second!

The Witchetty grub is known as bush tucker and is a delicacy of the Aboriginals in the Australian outback. They harvest them below the root system of a Witchetty tree. Once they locate the burrow hole, the root can be split into two to reveal the Witchetty grub. 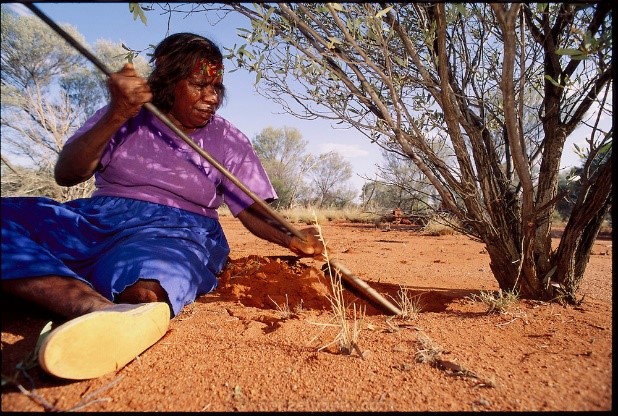 Looking like a caterpillar; this large white grub is the larvae of a moth. once caught it wriggles in the palm of the hand. Traditionally they are a breakfast food for Indigenous people and are super popular with their children who absolutely love them!

3. Vegemite– whatever you do don’t mistake it for Nutella! 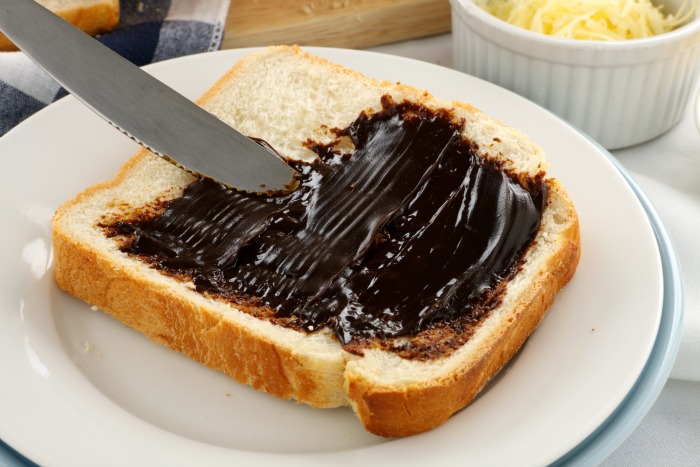 Once you overcome the smell and look of this brown slurry paste, you either become addicted or never want to taste it ever again!

This sticky brown paste with a concentrated, salty flavour is usually spread on buttered toast in the morning or eaten with crackers and cheese. Made from yeast extract, it is a by-product of brewing beer and is basically the slurry from the bottom of the barrel that most breweries throw away!  Vegemite is a saltier and more bitter version of Marmite. It is flavoured with various vegetables and spices which gives it that unique flavour.

Most Australians grow up eating it and most Aussie’s love nothing more than to make a Vegemite sandwich made up of two slices of buttered bread. Vegemite with cheese is popular too, topped with avocado, lettuce or tomato. The vegemite and peanut butter combo is a calorie loaded favourite too. 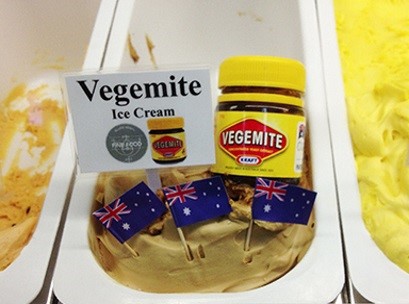 Some creative chef’s mix anything they can get their hands on; starting with toast and ending up with ice-cream. When a Vegemite flavoured ice cream was made in 2017, it caused a storm on social media, leaving critics to advise people to avoid the Vegemite recipes online. 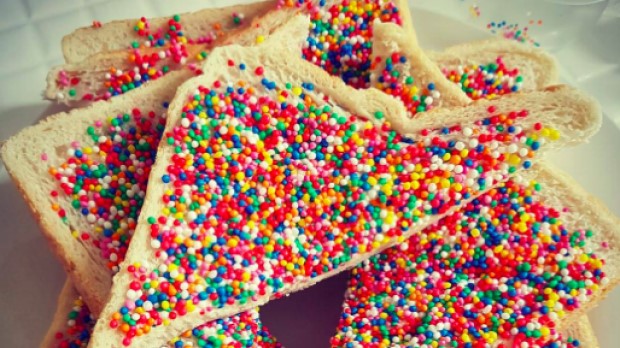 Confusing to the rest of the world; Fairy Bread is an invention which is the pride of Australians.  This rainbow coloured sugar sandwich adorns children’s birthday party tables and is Australia’s national party food. Adults who have not outgrown their iconic treat from the past, swallow their pride and ignore healthy food habits, to grab a fairy bread and remind themselves of their youth.

This pretty, brightly coloured, open sugar sandwich is just hundreds-and-thousands, known as ‘sprinkles’ to some, on white buttered bread. Aussies are seriously shocked when they find out that the joy of fairy bread is not enjoyed throughout the world.  There is even a World Fairy Bread day in November which invites you to honor the Australian Icon.

Fairy Bread first had its name mentioned in The Hobart Mercury, in April 1929, when the article asked people to ‘bring a plate’ to the Big Swan Party at a hospital for sick children. There is something sweet yet tinged with sadness about the thought of Fairy Bread being served to sick children!

5. Meat Pies in Pea Soup –a soggy pastry delight on a sea of peas! 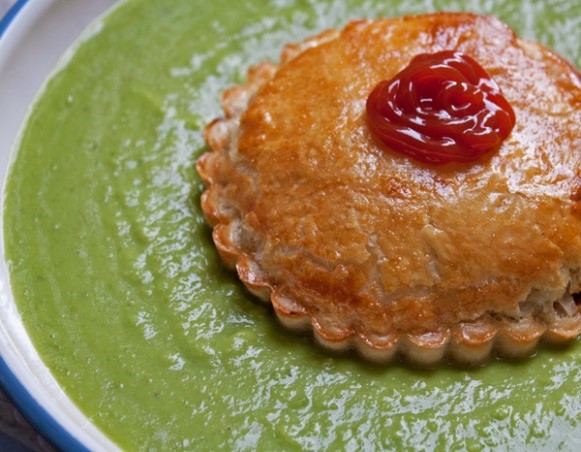 The classic Aussie Meat Pie is a national treasure and almost every bakery and supermarket as well as the servo (service station) will have an amply stocked pie oven. But soaking a meat pie in pea soup goes to another level!

Pie Carts where invented by James Gibs in 1880’s, who had emigrated to Adelaide from Scotland. They quickly became a late-night comfort food uniting truckies, cabbies, drinkers and workers alike. As an alternative to the solo meat pie, the pie carts also sold the ‘Floater’ a meat pie was served in thick pea soup. 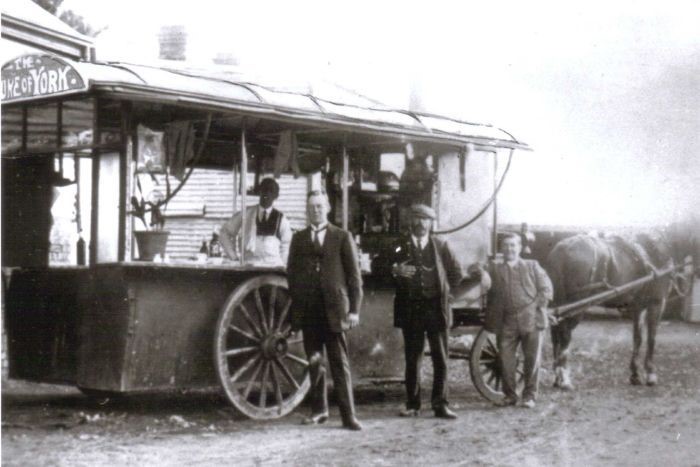 You could find the meat pie either, sitting in or submerged, the right side up or upside down and with tomato sauce as the finishing touch. 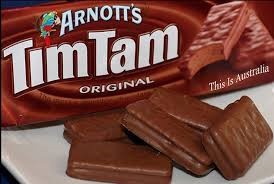 You haven’t lived if you have not tried a Tim Tam!  Once tried, this distinctive chocolate biscuit makes you want to go for your second and third!  It consists of a layer of chocolate cream sandwiched between chocolate malt biscuits, all coated in chocolate. Tim Tams are a cross between a Penguin biscuit and a Club Milk. 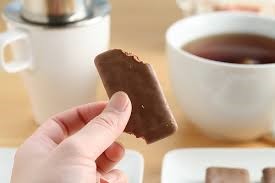 Aussies say the best way to eat them is by doing the ‘Tim Tam Slam’- a soft and sticky chocolatey experience, you won’t forget. This involves biting the diagonal corner off then taking a cup of coffee, tea or even more indulgently hot chocolate and using the Tim Tam as a straw to suck the drink through the biscuit.  This needs to be done quickly, before it gets too mushy and falls into your drink.

Tim Tams are the typical gift to take back overseas after an epic trip down under and the only complaint you may ever hear is that there are only 11 biscuits in the packet! 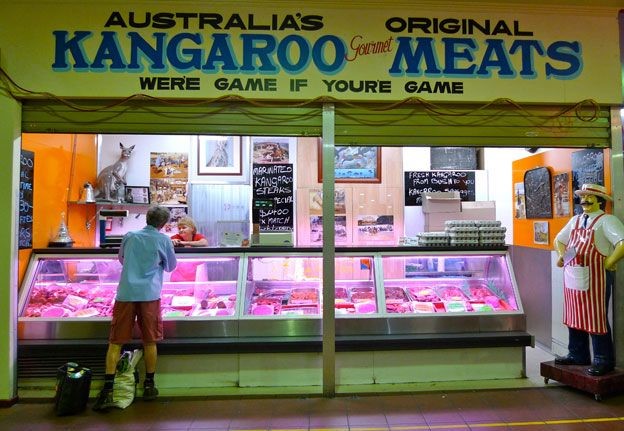 Can you believe that kangaroo has its own section in the supermarket! You will find kangaroo meat, sausages and burgers that you can cook like beef. High in protein and low in fat, this red meat has a strong gamey flavor of its own and tastes better when not overcooked. Kangaroo tail soup is well known and consists of kangaroo tail, carrots, celery, onions, herbs and seasonings. For many people growing up in the 1950’s it was a family dish. 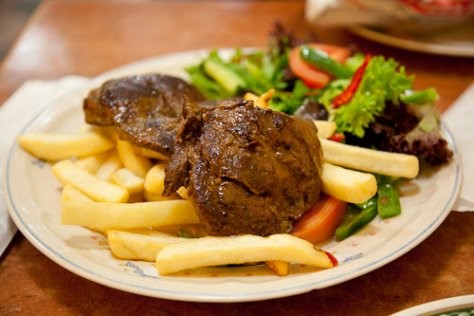 Kangaroo is often found in regular restaurant menus across the country, not just the speciality restaurants. Some people may not see this as a strange meat to eat because so many places in the world eat local animals. You could only find kangaroo meat in Australia or Papua New Guinea up until 2010, when Australia then started exporting the meat to other countries.

Kangaroos are a protected species but there are so many of them that they are considered as pests. They are professionally culled by shooters who are bound by a strict quota system, but some environmentalists argue it is a needless slaughter. There are no kangaroo meat farms in Australia, so all the meat is harvested from wild animals. 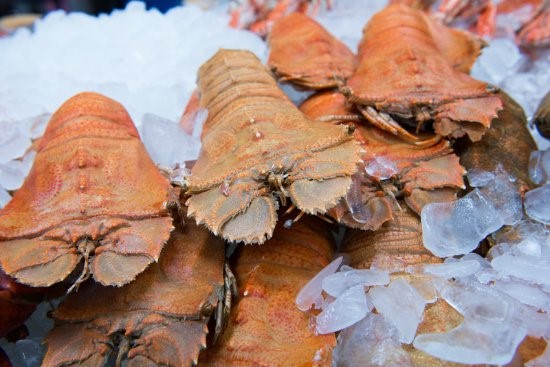 Moreton Bay Bugs and Balmain bugs look like insects, but they are really crustaceans.  Balmain Bugs also have a wider body that makes them different from Moreton Bay Bugs.  They look a little like crayfish in terms of size. Unlike any other crustaceans, the meat of the Moreton Bay Bug can only be found in their tail; so only 30% of their total mass can be eaten. Translucent when raw, it is a white meat that is known for its firm texture. Their brown hard external shell changes to red-orange when cooked just as lobster or crayfish. 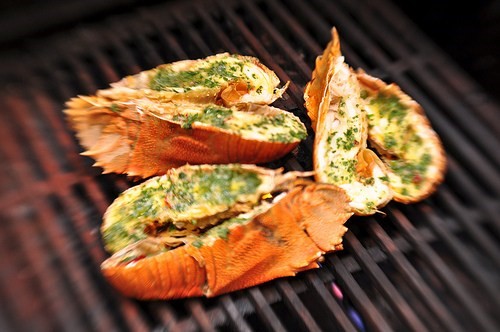 More widely known as the Moreton Bay Bug after Moreton Bay near Brisbane Queensland; they can also be found at the Queensland/ New South Wales border, south to Western Australia and Tasmania. To prepare for cooking they are often cut in half, drizzled with butter or oil, seasoned with salt and pepper then cooked on the barbeque in their shell. They can also be poached, steamed or grilled. Their flesh tastes like rock lobsters and has a medium to strong flavor.

Normally if you mention edible bugs, everyone will be disgusted but when it comes to Moreton Bay Bugs, the amazing taste will help you forget about the name! 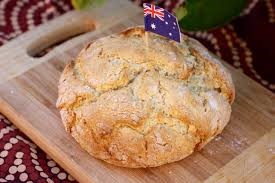 Made by travelers, native aborigine, stockmen, road workers and swagmen in days gone by, it was known as a filling cheap food. The Damper is a traditional Australian bread, made as a paste with only wheat flour, water and a pinch of salt. It is then baked in the ashes of a camp fire. It was improved by adding milk, butter, grains or anything which gave it a taste, apart from chewing the coal!

Today it can be found as traditional Australian fare made with milk, self-raising flour, salt, butter then a variety of extras like, mixed spice, sultanas, dates, currants, mixed peel as well as yoghurt, sugar, eggs and even beer. A baking tray lined with baking paper means it can also sit on a trivet in the camp oven to avoid eating nasties.

All that is needed in this campfire specialty is a smear of butter and a loud sing along session of Waltzing Matilda! 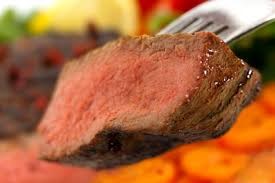 An unconventional meat found in the land Down Under, the Emu is Australia’s largest endemic bird and is now farmed for its meat oil and leather. Eaten for thousands of years, Aboriginals traditionally hunted Emus for their meat and oil, which was thought to have medicinal properties.

Emu meat is it is virtually fat free and low in cholesterol.  High in protein, iron and vitamin C, Emu meat is tender with a similar taste to chicken. It can be grilled or fried and is often eaten slightly rare. Good for pizza toppings it also works well when smoked and served cold. But beware just as Chicken Salt is used to flavour chips there are Emu flavoured chips around!

The Emu is a native, flightless bird who can run as fast as 50mph. Both the kangaroo and Emu appear on the national coat-of-arms, so devouring the national symbol could just rub people up the wrong way!  if you do not fancy tasting Australia’s largest bird stick with steak! 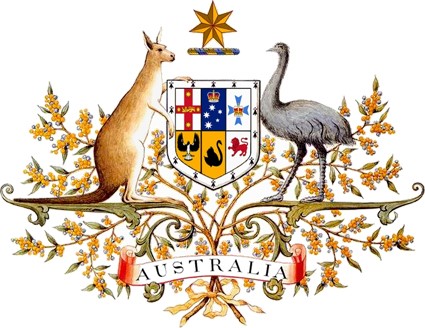